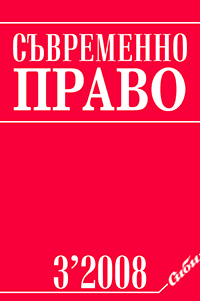 Summary/Abstract: During the last decade the Public-Private Partnership (PPP) phenomenon developed in many fields falling within the scope of the public sector. Various factors explain the increased recourse to PPPs. In view of the budget constraints confronting states and municipalities, this form of partnership meets a need of private funding for the public sector. Another possible explanation is the desire to benefit more in public life from the know-how and working methods of the private sector. The development of the PPP is also part of the more general change in the role of the state in the economy, moving from a role of direct operator to one of organiser, regulator and controller. At European level, it was recognised that recourse to PPPs could help to put in place trans-European transport networks which had fallen very much behind schedule, mainly due to a lack of funding. The public authorities of Bulgaria often have recourse to PPP arrangements to undertake infrastructure projects, precisely in sectors such as transport, public health, education and national security. Taking into consideration the harmonised Bulgarian law on public contracts and concessions, as well as the legislation on the public-private joint ventures under the Commercial Code (1991), the State Ownership Act (1996), the Local Self-Government and Local Administration Act (1991), etc., the present article investigates the legal forms of PPPs of a purely contractual nature, in which the partnership between the public and the private sector is based solely on contractual links. The article also examines PPPs of an institutional nature, involving cooperation between the public and the private sector within a distinct entity (joint venture). This distinction is based on the observation that the diversity of PPP practices encountered in Bulgaria and other Member States of the European Union can be traced following two major models. Each of these raise specific questions regarding the application of Bulgarian law on public contracts and concessions.