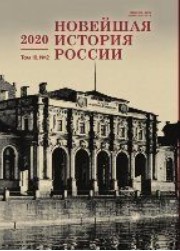 Summary/Abstract: This article seeks to clarify the heuristic possibilities of studying the socio-political identity of young people by using autobiographical material. The main source of data are Komsomol autobiographies, prepared in 1922 in connection with ongoing revisions of the composition of active members of the Russian Communist Youth Union in the Omsk province. These materials reflect not only the individual experiences of people living in a particular historical epoch, but also as one means of constructing collective identity and social memory. Young people chose different strategies for describing their lives. In preparing their autobiographies, boys and girls intuitively focused on those events that allowed them to demonstrate their commitment to communist ideals and proximity to Soviet power. Despite qualitative differences, a comparison of autobiographies identifies several recurring themes and motifs: childhood, education, family relationships, and memories of the revolution and the Civil War. In an effort to meet social and political demands, young people did not hide their shortcomings. Non-proletarian origin, received education, and religious education turned into a peculiar mechanism of justification and self-criticism. Thus was formed the positive image of a person who rejects his former life and its values. The preparation of autobiographies served an important socio-political function of legitimizing the personality and its status in the communist youth union.