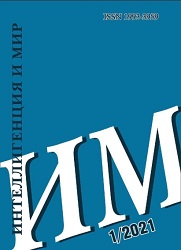 Summary/Abstract: The last decade of the 20th century marked the beginning of profound changes in the ideological orientations and worldviews of Russians. In the 1990s, the attitude towards religion, its place in everyday and social life changed significantly. The revival of religious and church traditions is no longer perceived as an unusual, surprising and alarming phenomenon. The religious factor has become so active and influential that ignoring it has become almost impossible. The purpose of the article is to try to identify the role of nontraditional religions in the ideological orientations and worldviews of the Far Eastern intelligentsia in the 1990s. The study’s source base consists of two equal parts: the author’s field diary, based on the included observation of activities conducted by representatives of non-traditional religions, meetings with missionaries, visits to religious communities of non-traditional religions, both individually and with students of the DVSU between 1989 and 1996, and the author’s personal archive; the second part of the sources — publications in the media, internal literature of non-traditional religions, materials of the current archives of the departments of relations with public and religious organizations administrations of the Far Eastern Federal District. The methodology chosen by the author for this study includes a comparative analysis that highlights the most significant problems in the «religion-intellectua» relationship; Identification of objective and subjective reasons for the growth of interest of the Far Eastern intelligentsia in nontraditional religions in the early 1990s and the decline of this interest after the adoption of the “On Freedom of Conscience and Religious Associations” (1997). The spread of non-traditional religions of domestic and foreign origin in Russia is the result of sudden and profound sociocultural changes of the late 1980s and early 1990s, which gave rise to a sense of pessimism, futility of life, and a sense of fragility of the surrounding world. This was felt most acutely by young people and intellectuals, who were acutely faced with the question of finding the “new foundations” of their individual existence. The God-seeking boom, which took over thousands of Far Easterners in the early 1990s was originally aimed at finding the foundations of its individual existence and “true” faith in Orthodox communities. It was their inability in the early 1990s to meet the “spiritual needs” of the God-hunters that led to the that a certain part of the Far Eastern intelligentsia and students began to seek support for their individual existence in various pseudo-religious groups and non-traditional religions, whose beliefs after the adoption of the Religious Freedom Act (1990) and the “discovery” of Vladivostok began to be actively distributed in the Far East by missionaries of neighboring countries. The author concludes that the decline in interest in non-traditional religions among the Far Eastern intelligentsia is connected with the process of self-determination, the search by the intelligentsia for the “new” foundations of individual existence. By the end of the 1990s, the process of religious self-identification was almost over. In the worldview of the Far Eastern intelligentsia began to prevail cultural-national-religious self-identification, even non-believers self-identified themselves as Orthodox, as carriers of the cultural tradition of the Russian people.