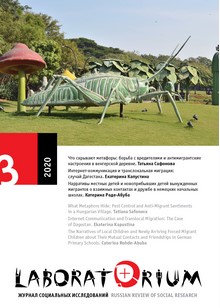 Summary/Abstract: This article presents results of the study of the role of “ethnic” markets in the processes of urban transformations. The case of Irkutsk demonstrates the integration of the markets into everyday life of the city and their incorporation into the urban infrastructure. “Ethnic” markets are a special phenomenon of urban life and a complex of social, economic, and interethnic relations. The aim of this study is to analyze ethnically marked markets as specific localities and an important part of urban space. The analysis is based on Henri Lefebvre’s theory of construction of social space. This theory enables the study of “ethnic” markets as a complex of multidirectional processes that determine the forms and contents of social interactions. The social anthropological focus of the study allows us to consider “ethnic” markets as special localities included in various coordinate systems. The analysis includes not only the physical but also mental and social spaces and facilitates more in-depth and systematic conclusions. Moreover, the case is typical enough to allow for generalization of these conclusions. The results of field observations of Irkutsk “ethnic” markets suggest that markets are important for the city in terms of their impact on the organization of urban space. Most importantly, they function as the attraction of people, goods, and other elements involved in the implementation of the city’s everyday practices, as well as the intersection of social and infrastructure networks, which ensures a high density of the interactions.