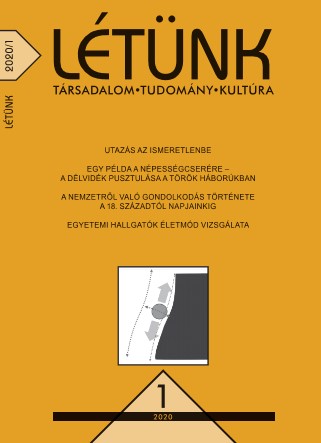 A NEMZETRŐL VALÓ GONDOLKODÁS TÖRTÉNETE A 18. SZÁZADTÓL NAPJAINKIG
The History of Thinking About Nation From the 18th Century to Nowadays

Summary/Abstract: According to the present paradigm of nationalism, the nation has a very high concept of abstraction, and is – due to its abstract meaning content – difficult to define. The birth of a (state)nation in today's sense is in the 18-19th century, but its development path shows a rather diverse pattern in Europe and around the world. Yet, in the discourse of the primordialist and partly perennial national views established at the beginning of the 20th century, the nation appeared as a substantively existing, realistic dimension. The primary goal was to formulate a universal definition along the more general aspects. The paradigm change in the 1960s gave new dynamic to the research of the nation: although it continued to appear as a real existing group, but was also seen as a social construct of the modernism. The dominant aspects of its constructed existence led to the formation of a very persistent political nation – a cultural nation dichotomous approach, which appeared in a slightly different color, but essentially identical in almost all contemporary typologies. How these typologies have helped to better understand the essence of the nation is now highly controversial. The new paradigm shift in the eighties and nineties brought about a hundred and eighty degree change and at the same time meant shifting the meaning of the concept of nation to a higher abstraction level: the nation now appears as a group with physical extension, not in real dimensions, but as a practical classification category, form. The focus of his scientific inquiry is not on the nation's meaning, but on its practical functioning. The political nature of the nation is becoming more and more clear – as its practical relevance always stands out in political situations! – and its understanding is based on practical status analysis, such as the national identity of a given state (is whether it intends to extend its political power to a nationally or culturally defined community), how it functions as a classification class or as a mobilization force, and which current challenges question the legitimacy of thinking in terms of nation.