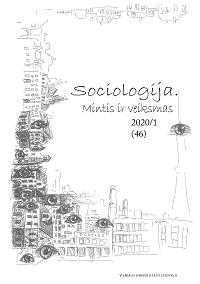 Summary/Abstract: This paper aims to analyse the impact of demographic and social factors on first partnership in Lithuania – the duration of premarital cohabitation, the sustainability of such relationships, and the transition into marriage. The research is based on the 2019 Family and Inequality Survey of 1970–1984 birth cohorts. Data analysis shows that most young people began their first partnership as a cohabitation rather than marriage, and the average premarital time spent in a cohabitation increases within this cohort. Cohabitation eventually transitions into marriage, and five years after the start of cohabitation, almost all cohabitants marry, and only a small percentage of cohabitating unions dissolve. Based on Cox regression analysis, the level of education and finished studies, as well as pregnancy, are significant predictors of the transition from cohabitation to marriage. The results of the research show that three decades after the beginning of the spread of cohabitation in Lithuania, cohabitation competes with marriage, but it does not challenge the importance of marriage as an institution of childbearing and upbringing.