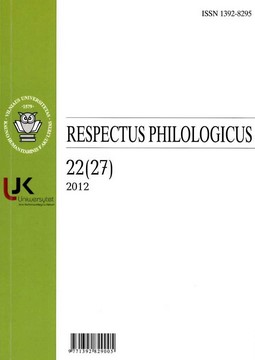 Summary/Abstract: The article deals with variously stressed nouns that were discovered in the 1950s and 1960s in handwritten sources of the southern Aukštainian subdialects in the archive of dialects of the Language History and Dialectology Department of the Institute of the Lithuanian Language. Data on the nouns and noun forms of the southern Aukštaitians, collected from almost the entire area under study, i.e., fifty-five inhabited settlements, demonstrate two tendencies: stress variance and oxytogenesis. Summarising the collected data, it was established that nouns with the same stem (o, iio, ā, ē, iā, i, iu and u) are most often stressed in two ways in the southern Aukštaitian area, e.g., karklas (2/4), žmogùs (4) / žmõgus (2), and others. Words with non-productive i, u, iu and consonant stems can also have separate parallels with other stems, or parallel forms of other separate stems, e.g.: vagis (4), sing. gen. vagiẽs / vãgio, cf. nom. vãgys / vagiai, šuvà (4), sing. gen. šuñs / šunès / šuniẽs / šùnio, etc. The abundance of the variants discovered in these handwritten sources of rather small volume demonstrates the intensity of stress variance in the southern Aukštaitian area in the 1950s and 1960s, which is corroborated by two facts. First, most of the forms of the words with variable stress in the sources under study appear several or even many times. Second, quite a few forms of such nouns were discovered within the same subdialect. Despite all this, nouns in the southern Aukštaitian subdialects are not stressed interchangeably, but according to one accentual paradigm.