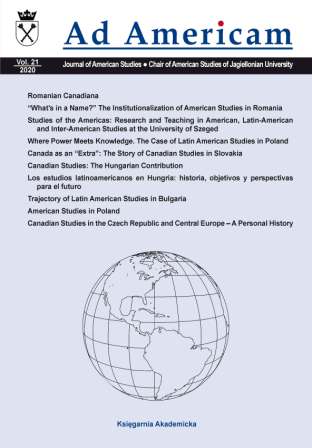 Summary/Abstract: The present article sets out to analyze the emergence and institutionalization of American Studies as an academic discipline in Romania, with a focus on the specific contexts and factors that influenced this process, and the ways in which its practitioners defined, constructed, and focused their endeavors. Taking the University of Bucharest as a case study and adding insights from other Romanian universities, the paper seeks to give an account of: 1) the ways in which the several decades-long tradition of teaching American literature in the Communist period (sporadically until the 1960s, but ever more substantially in the following decades) prepared the ground for the institutionalization of American Studies programs; 2) the “conditions of possibility” that enabled this institutionalization after the collapse of the Communist regime in 1989, with an emphasis on the restructuring of the Romanian higher education system, on the one hand, and the specific renegotiations of the field of American Studies, on the other; 3) American Studies curriculum development and its impact on Romanian academia as an example of curricular reform in the spirit of interdisciplinarity; 4) the situated contributions that Romanian Americanists have made to international scholarship in American Studies by bringing new research agendas to the fore.