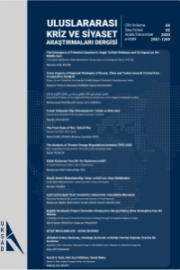 Summary/Abstract: The term Hybrid War was started to be seen frequently in the literature after the Ukranian Crisis. Although there are plenty of studies about it, there is not a commonly accepted definition. Another discussion about Hybrid War is whether it reflects a novelty. In this work, although we will discuss it’s definition and novelty, our purpose is not to define or to determine whether it is novel. Our claim is that Hybrid War is not a type of war but it is the final form of war because of the evolution of war. So, Hybrid War is the war itself