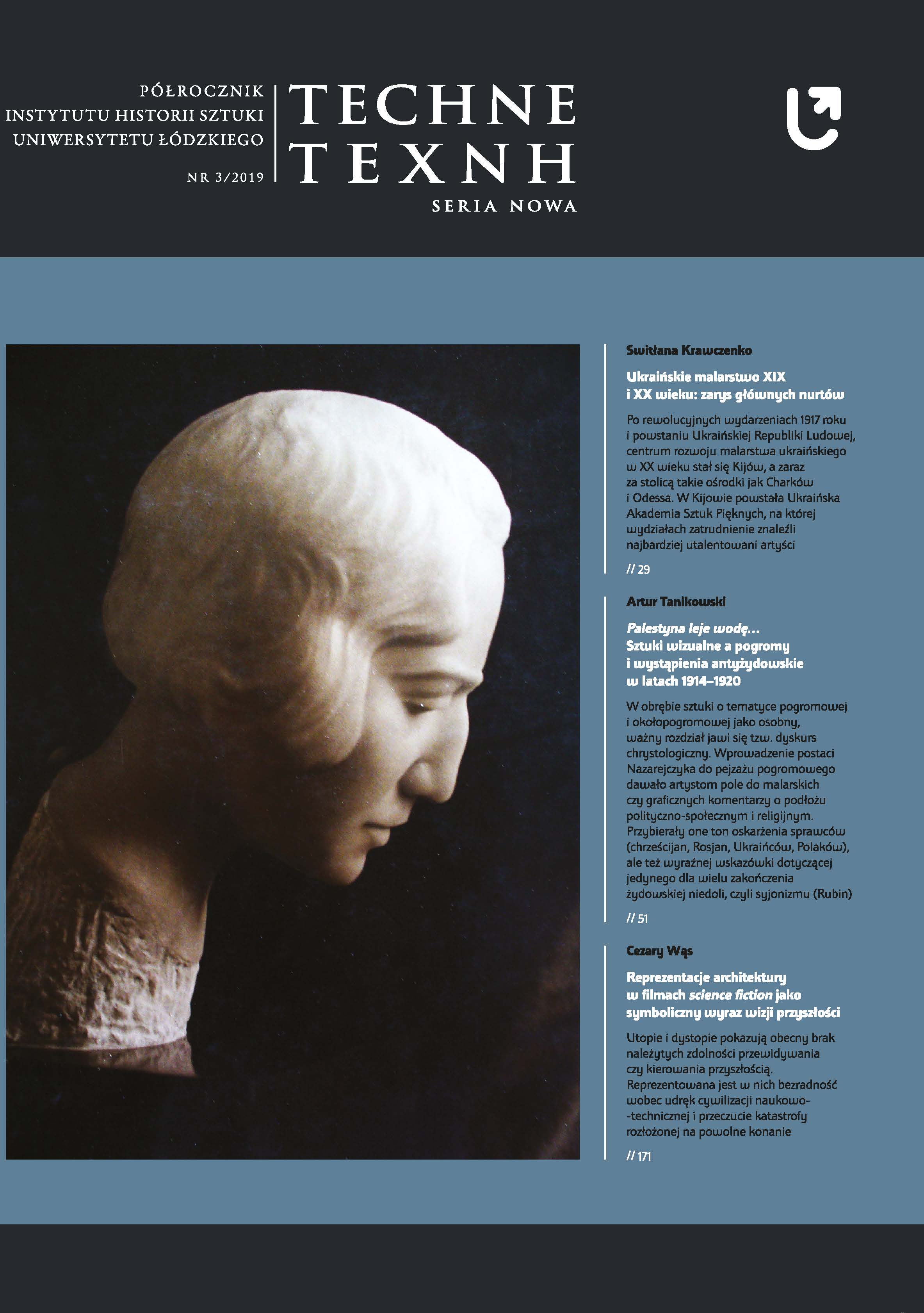 "Palestyna leje wodę…" Sztuki wizualne a pogromy i wystąpienia antyżydowskie w latach 1914–1920
"Palestine is pouring water..." Visual arts in the face of anti-Jewish pogroms and riots in the years 1914–1920

Summary/Abstract: Authors of paintings, drawings or graphics on pogrom themes, representing various generations, art schools, stylistic tendencies, political views and social status, have rarely witnessed commented events. They visualized them based on various reports in the press, comments from survivors, their own imagination, and finally iconographic formulas that have been popularized for years. If, based on known works, we were tempted to arrange a narrative coherent scenario of pogroms, it would have to start with „pogrom shouts”, presenting the ominous pre-pogrom atmosphere, justifying the events in the opinion of their author (Pobóg-Rossowski), in terms of politics, religion and society. Such images are extremely rare. The lithograph showing the perspective of would-be victims who are preparing for self-defense (Wachtel) is quite unique in this group.Much more often, the artists presented scenes of the actual pogrom – destruction of the victims’ belongings, burning their homes, hiding, murdering, and much less often rapes. Pogrom by Wojciech Weiss is an outstanding phenomenon in this group of works. Within these episodes there are scenes of escape of would-be victims trying to save themselves (some Pann’s lithographs). They should be clearly distinguished from images of post-fire exiles, because their images are already in the last, perhaps the most numerous group, which can be described as the consequences of pogroms or their effects. This iconography includes views of retinue and cemeteries.In the collection of pogrom and post-pogrom art there is a separate, important episode – Christological discourse. The introduction of the figure of the Nazarene into the pogrom landscape gave artists room for painting or graphic commentaries of the political, social and religious background. They took on a tone of accusation of perpetrators (Christians, Russians, Ukrainians, Poles), but also clear directions include the only way of ending misery for many Jews, i.e. Zionism (Rubin). Jewish Christ, confronted with Ahasver, the Wandering Jew, or even identified with him, instead of being a cause of Jewish misfortunes became a victim of the followers’ bonds, a victim with which it was easier to identify.It is impossible today to fully catalogue the artistic narratives about the Jewish pogroms of the First World War, the October Revolution and the time that followed just after both bloody conflicts, when the Polish-Ukrainian struggle over Lviv and the Polish-Bolshevik war took place. The events commented on by the artists are part of a long string of anti-Jewish repression, including the ones more than a decade earlier, to mention the pogroms in Chisinau and Gomel (1903) as well as those in Żytomierz and Odessa (1905). They found their commentators in the field of visual arts, who at the beginning of the 20th century created compositional and iconographic schemes, later inspiring their younger.