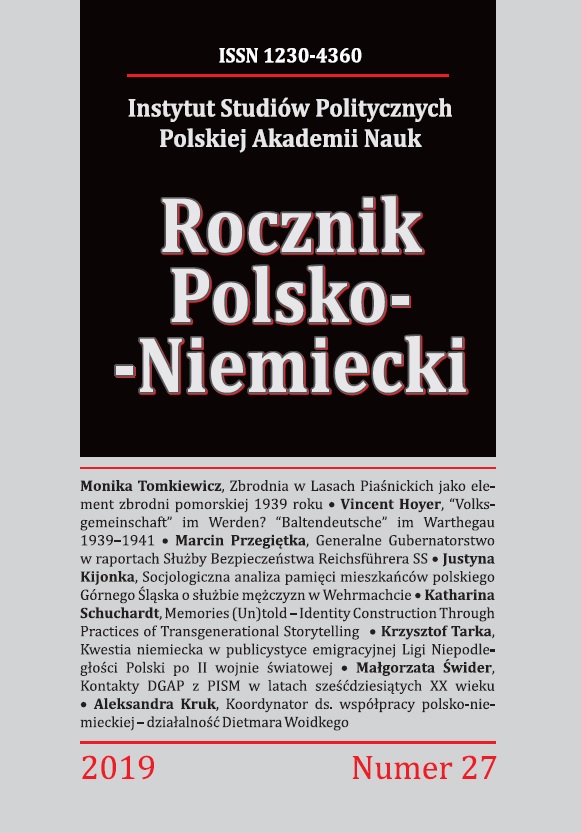 Summary/Abstract: The German attack on Poland resulted in the incorporation of Western Poland into National Socialist Germany in October 1939. In the context of ‘Germanisation’ policy and in order to ‘make space’ for German settlers, the occupiers murdered, expelled and deported Poles and Jews from these territories. In addition to members of the German minority in Poland, so-called ‘ethnic Germans’ (Volksdeutsche) from eastern Europe and Germans from the ‘Altreich’ (Germany within the borders of 1937) were also settled there. However, the situation in the Warthegau fell short of the expectations of Baltic German re-settlers. As reports sent to the ‘Volksdeutsche Mittelstelle’ (the organisation responsible for the administration of the settlement of ethnic Germans) show, Baltic Germans sought to influence their situation in the Warthegau by referring to the promising utopia of ‘Volksgemeinschaft’ (national community). Their complaints about the lack of solidarity among the Germans as well as interactions with non-Germans served to discredit members of other groups and justify alterations in their favour. Thus, the ideological concept of ‘Volksgemeinschaft’ was not an inflexible construct, but was appropriated and used towards different ends by various actors.