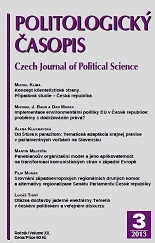 Summary/Abstract: It is clear from political science literature that political parties are not static entities. Similar to other political institutions, they tend to transform with time, in response to changes in their surrounding environment. If the economic, social, cultural and political parameters in society are to substantially change, it is possible to deduce a change in the role of a political party and its organisational structure. The transition from totalitarian to democratic societies in Central, and partially in Eastern Europe, presents a process so unique that one may legitimately question if this has not resulted in a serious modification of the catch-all party type. In the region of Central Europe, Czechoslovakia – and after 1993 the Czech Republic – presents a special case, where during political and economic transformation next to general features, specific factors were also enforced, which eventually influenced the set-up and formation of parties in their early stages. It is left to consideration and further scrutiny to decide whether the unrepeatable environment of the Czech-Moravian melting pot, has not cultivated the clientelistic form of political party.

Strany a stát, volby a finance Party and State, Election and Finance 2003 Problémy pravice, problémy ODS "Catch-allism" je podmínkou modernizace Problems of the Right. Problems of the ODS. „Catch-allism“ as a Condition for the Party’s Modernization 2004
2020 © CEEOL. ALL Rights Reserved. Privacy Policy | Terms & Conditions of use
ICB - InterConsult Bulgaria ver.1.4.0210