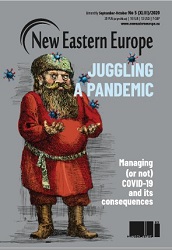 Summary/Abstract: On July 1st Russia’s nationwide voting on constitutional amendments – designed primarily to give the current Russian president, Vladimir Putin the opportunity to remain in power until 2036 – came to an end. According to Russia’s Central Electoral Commission, more than 57.7 million voters, or 77.92 per cent of those who voted, supported the amendments, while 15.7 million, or 21.27 per cent, voted against it. The turnout, according to official reports, reached almost 68 per cent.