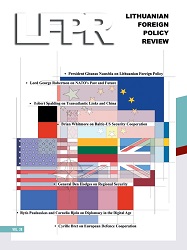 Summary/Abstract: The most alarmist perspective interprets the Chinese interest in the region in general and Lithuania in particular as an attempt to target the soft underbelly of both the EU and NATO and pursue the long-term “divide and rule” tactics on the European and even Euro-Atlantic dimensions. As the ongoing comprehensive rise of China is primarily driven by economic factors, its interest in Lithuania follows such imperatives and increasingly raises concerns due to their implications for the latter’s own competitiveness, prosperity and security. China is interested in affecting Lithuania’s public and political discourse related to the sensitive topics that it deems to be purely domestic and thus off-limits to foreign countries.