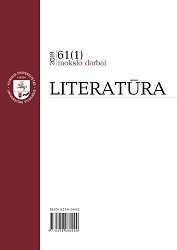 Summary/Abstract: The article employs the egodocumentary approach to examine how the private writings of Albertas Dilys (1920–2000), political prisoner and Lithuanian scholar of the 1920s generation, records and reflects upon his refusal to compromise under the circumstances of the Soviet occupation. Dilys was part of the generation who were born on the eve of the creation of the State of Lithuania – between 1917 and 1922 – and who, having graduated from the schools of the newly independent state, entered university by the end of 1930s with a distinct aim to contribute to the European culture worthy of a free nation. However, the Second World War and the alternating Nazi and Soviet occupations brought an end to these youthful ideals. Because the existential choices made by these young people pulled the generation apart and, in regard to the Soviet oppression, disseminated it both geographically and axiologically, defining its conceptual coherence is somewhat problematic. Yet, reflecting on separate individual choices may help us understand the people’s motivation and the paradigms which bring this generation together on the one hand and break it up on the other. Rather than appraise the decisive generational self-conceptions in the context of 1944, the case of Albertas Dilys enables us to look into the different manifestations of conscious existential resolve, its origins, and consequences. The notion of the 1920s generation here describes the humanities students with literary aspirations who first studied at Vytautas Magnus University in Kaunas and then at Vilnius University. As high-school pupils, most of them took part in the Ateitis movement, which was a Catholic organisation opposed to the Lithuanian government of the day. At university, they joined Šatrija, a society dedicated to the study of art, literature, and philosophy. At the centre of the present research are documents testifying to Dilys’ personal existential quest and self-realisation in the context of repressions and further oppression: his memories, correspondence, notes, journals. To frame the research material, the article makes partial use of intertextual and sociocritical analysis. Dilys’ egodocumentary accounts are examined in light of historically reliable biographical and background facts. This article aims to discover and highlight in Dilys’ egodocuments his testimonies of self-reflection, personal resolve and its consequences and, by means of comparative analysis, to look for similar premises in the accounts of other contemporaries in order to indicate the epistemological gaps in the research field of the 1920s generation. Dilys’ case is by no means typical; cases like his have been deemed marginal in most sociological and sociocultural research. The history of existential choices and reflection on it, as testified in Dilys’ egodocuments, have a distinct character: emphasis is placed on inner resistance, whose parallels extend into the spiritual maturity derived from youthful ideals, the quest for the meaning of life, and the adoption of an ethical position at the expense of career development and professional life and subjection to ostracism and relative poverty. This egodocumentary research reveals the complexity of uncompromising choices and their consequences in a repressive and oppressive society. Dilys’ egodocuments are strongly oriented toward the past as well as the ideal of youth and the pastoral world of the parental home. Similar utopian undertones and pathos as well as solidarity with the 1920s generation of idealists trapped in a historical downfall – characteristically, this generation is perceived from passéist perspective, in retrospective projection that centers on the youthful past – crop up in the accounts of other former members of Šatrija. The paradigm of Dilys’ existential choices calls for a further inquiry into the life of the 1920s generation.