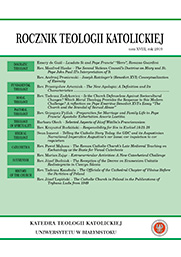 Summary/Abstract: Originally, the members of cathedral chapters were organizationally and structurally divided into two categories: general prelates and canons. During the early stages of organization, prelatures were simultaneously dignities and capitular offices. After the Middle Ages, however, prelatures ceased to be offices and became titular dignities instead. Due to the evolution of the structure and the development of the organization of the chapters and the ways in which they functioned, it was necessary to appoint new officials who were independent of the particular dignities. From the moment that the college of prelates and canons was founded and established in Vilnius, they functioned and acted in spiritualibus and in temporalibus by following the example of the chapter in Cracow that had existed for centuries and adapted the practices to the local conditions of Vilnius. This influence is very clear in the selection and competencies of the officials chosen for the Cathedral Chapter of Vilnius. Among the officials chosen before the partition of Poland took place, those who had the most lasting effects were the capitular procuators, inspectors of capitular goods and property, chancellors, notaries, architivists, and deputies to the Lithuanian Tribunal.

Wartość źródłowa akt wizytacji diecezji wileńskiej z drugiej połowy XVIII wieku The Source Value of the Acts of the Visitation of the Diocese of Vilnius from the Second Half of the 18th Century 2015
2020 © CEEOL. ALL Rights Reserved. Privacy Policy | Terms & Conditions of use
ICB - InterConsult Bulgaria ver.1.5.0616