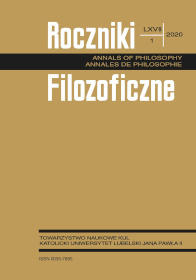 Summary/Abstract: Throughout the centuries, the doctrine of divine simplicity laid at the heart of Christian theology. In Thomas Aquinas’ mature thought, simplicity occupies a privileged place among other attributes of God. A simple (or completely) simple being is a being that does not consist of any parts or constituents. God’s being simple means that he does not exhibit any of the seven (and according to Aquinas the only possible) types of composition. The arguments that serve as the justification for this thesis can be divided into four groups which I labeled: the argument from the lack of potentiality, the argument from the priority of parts to the whole, the argument from the anterior maker and the argument from perfection. All of them begin with identifying God with the first cause of all things and add other premises that are specific to them. The first argument — that the first cause does not have potentiality and every composite being does have it. The second — that everything that is composite depends on it’s parts while the first cause is not dependent upon anything. The third — that every composite being needs a cause or explanation and the first cause has neither. The fourth — that the first cause is a perfectly good being and such a being cannot be composite. The analyses that were conducted show that the first two reasonings seem to be unsound. The third of the arguments provides a fine justification for the thesis in question. The fourth may serve as an additional, but weaker justification for it.