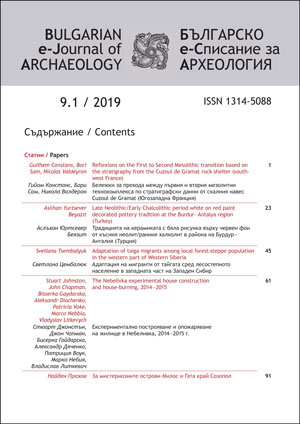 Summary/Abstract: Natural and climatic changes at the end of the 2nd – beginning of the 1st millennium BC, called “environmental stress”, caused a severe crisis in the economic systems of the Late Bronze societies living in the tundra-taiga and the forest-steppe zones of Western Siberia. The tundra-taiga areas were flooded and quickly swamped as a result of humidification and a drop in temperature, thus becoming unsuitable for human habitation. A mass migration of the taiga population has began to the south along the major rivers – the Ob, Irtysh, Tobol, and Ishim. The migrants occupied the sub-taiga and northern forest-steppe regions and brought their traditions of house-building, burial rites, pottery and tool-making technologies. They also continued to practice their traditional predatory economy oriented towards activities such as hunting and fishing in the territories inhabited by local Late Bronze populations. However, the economy, based on appropriation, proved to be non-viable in the conditions of the forest-steppe zone, where the economy was oriented towards cattle-breeding, resulting in the assimilation of the northern migrants. This assimilation of alien groups among the local forest-steppe population took around 200 years (7th to 6th centuries BC). As a result, several new cultures evolved in Western Siberia by the middle of the 1st millennium BC.