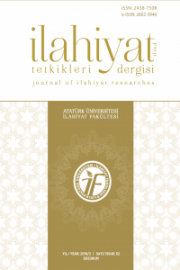 Summary/Abstract: This research deals with the place of well-known companion Alâ b. Hadramî in political, administrative and military activities during the caliphs of Rashid and the Prophet (pbuh). Alâ, a member of a family from Hadramevt and born in Mecca, became a Muslim before the treaty of Hudaybiyyah, and migrated to Medina. He was a messenger of the letter of invitation to Islam sent to the Emirate of Bahrain, Münzir b. Sâvâ. After the conquest of Mecca, Alâ, who was sent to Bahrain with his special authority to collect zakat and jizya as well as the invitation to the religion, was dismissed from his post shortly before the death of the Messenger of Allah. Alâ was reappointed to the Emirate of Bahrain by the first Caliph, Abu Bakr. He died on his way to assume the governorship of Basra. (d. 14/636)