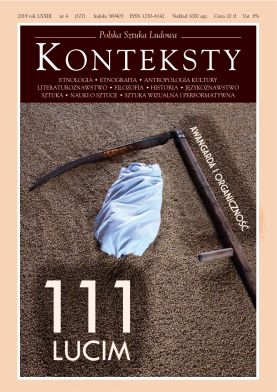 Summary/Abstract: Essays analysing two most important relationships in the life of Józef Czapski: with his sister, Maria, and Ludwik Hering. Józef Czapski’s older sister Maria (1894–1981) was a confidante and friend, who shared his creative and independent life. Agnieszka Kosińska focused on the significant motifs of Maria’s biography and its fusion with the spiritual biography of Józef Czapski and his circle. “The correspondence between the Czapskis and the Herberts perfectly extracts both the form and essence of the life shared by Józef and Maria. A form that stirred the curiosity of so many: how was this phenomenon possible? Perhaps it involved something abnormal and unnatural? Some sort of a taboo, begging your pardon? Have we forgotten so easily just how many shades of closeness can actually take place in human space? How many forms can be assumed by agape, eros, caritas? Józef and Maria were linked not only by their parallel paths (but what came first? their childhood affection or shared trail?) from Prague to Przyłuki, St. Petersburg, Warsaw, Cracow and Paris, but also by a profound human and creative understanding, which, naturally, was associated with their lifestyle”.Ludwik Hering (1908–1984) was a painter, man of letters, author of conceptions, and director and stage designer of Teatr na Tarczyńskiej and Teatr Osobny. “Known as the leaven of artistic and intellectual life in Poland and not only” – wrote Ludmiła Murawska-Péju, his niece, painter, and editor of the Czapski–Hering correspondence.“Even if his letters to Czapski were to be the only remaining part of the entire Hering œuvre – Kosińska wrote – they would suffice. We are dealing not solely with a precious metal of sensitivity, a ‘hotchpot of reality’ (a term used by L.H.) and anguish, depicted in such perfect and accurate images, suspense and dialogues, but, first and foremost, with operating with silence. Who knows: quite possibly Hering was one of the very few men in Polish literature – although I cannot say who else there could have been – capable of applying Norwid’s art of passing over in silence, including typography and punctuation, in this fashion albeit in a totally individual, purely Heringian way”.

„Konsystencja tego stanu: nie musieliśmy mówić, nazywać. Mogłem myśleć do Ciebie wprost”. O korespondencji Czapski–Hering “The consistency of this state: there was no need to speak and name. I could forward my thoughts directly to you”. On the Czapski–Hering Correspondence 2019
2023 © CEEOL. ALL Rights Reserved. Privacy Policy | Terms & Conditions of use
ICB - InterConsult Bulgaria core ver.2.0.1219