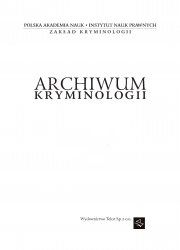 Summary/Abstract: The paper deals with two issues. One is the content of the concept of ‘social exclusion', including the components of the concept, the most important measures of the European Union to combat social exclusion as a social phenomenon, certain conclusions in the professional literature as to the relation between social exclusion and crime, as well as the significance of this concept and its relevant research in the development of criminorogical thinking. The second topic of the paper is the relation between social exclusion and crime in the former socialist countries, particularly in the countries that joined the European Union on 1 May 2004. The author evaluates the significance of 'social exclusion’ as a concept and of the related research for the development of criminology thinking, concluding that there are three prevailing criminology perspectives: a. the social perspective, b. the individual perspective and c. the situational perspective.In his attempt to answer the question of whether the former socialist countries of Central and Eastern Europe were inclusive or exclusive societies, the author finds that the features of exclusive and inclusive societies coexist in the societies of late modernity, including the countries of the CEE region. However, of importance here are the proportions and the main tendencies. In this respect, the paper can be read to say that the features of an exclusive society are present in the countries of the region to an extent giving rise to serious concern. In addition, the fear is that certain global and regional processes and challenges will further strengthen these qualities.At the global level, the neo-liberal economic policy and the presence of interntional terrorism together with the responses to be given can have particurarly adverse effects on the character of the society. At the European Union level, the great challenge is to reduce the economic and social differences between the member states. If the EU does not succeed in meeting this objective fairly soon, it risks having a new periphery of the East and Central European States. Therefore, criminology must give priority attention in this social-cultural situation to social justice and to the investigation of phenomena such as social exclusion hindering its prevalence.