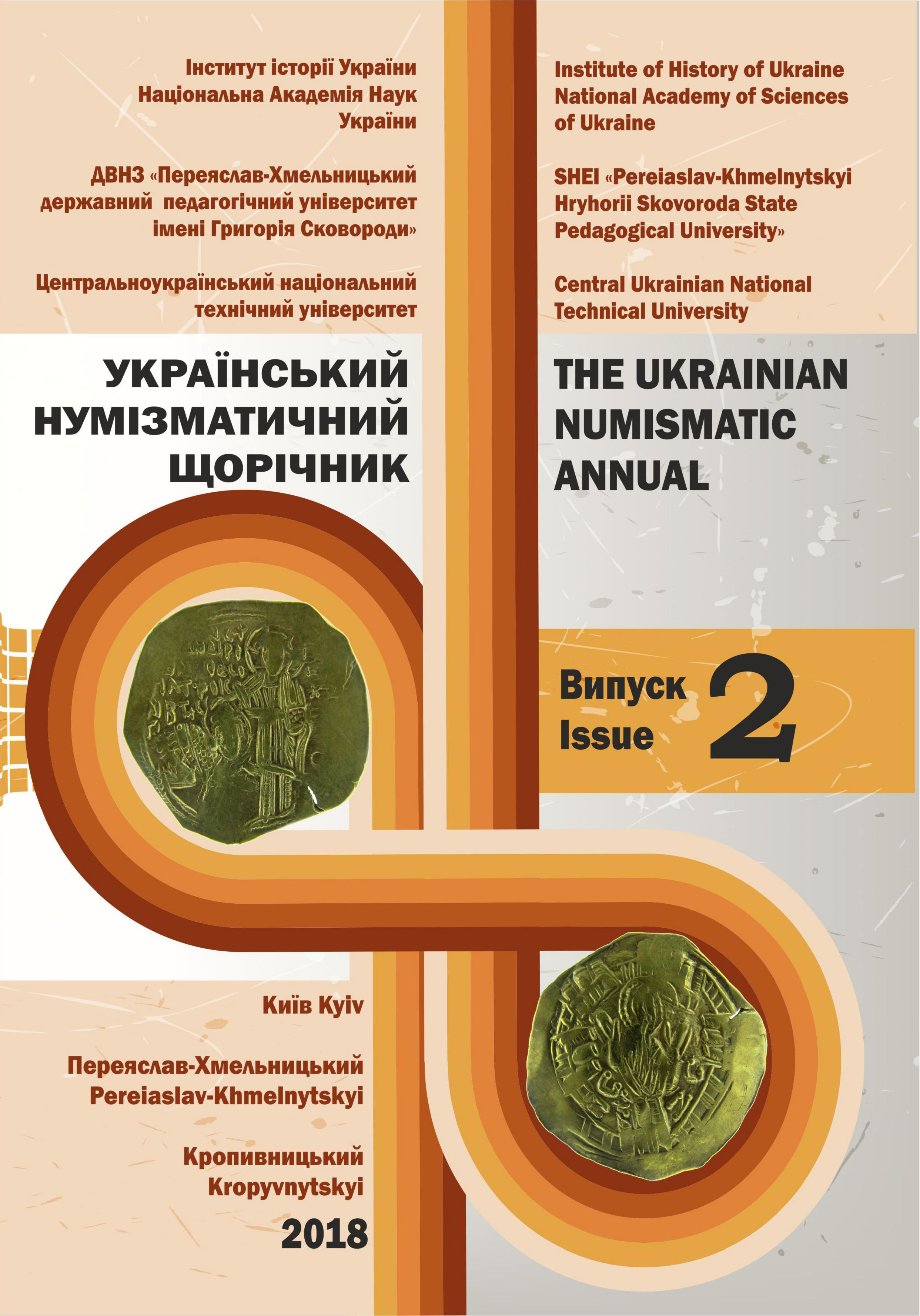 Summary/Abstract: In July 2018, a rather significant event happened in medieval numismatics at least, a hundredth IV type srebrenik of Vladimir Svyatoslavich (978–1015) was excavated on the territory of Ukraine. In the Corpus of the oldest Rus’ coins of the X–XI centuries, which was based on the results of the first century of the study of srebreniks, only 25 specimens of Vladimir Svyatoslavich’s type IV coins minted with17 and 18 stamp pairs were taken into account. In the middle of September 2018, it became known about 121coins, which can be classified as authentic, and about a dozen variants of counterfeits of this type, which among the whole quantity of Vladimir srebreniks are the least common.100 pieces from this quantity were found in Ukraine’s territory, 11 srebreniks in Russian Federation,3more coins in the Republic of Belarus, places of discovery for the rest were not yet ascertained, but reliably considerable part of them also can come from findings in Ukraine. Due to almost five fold increase of studying material, it becomes possible to specify metrology,considerably extend topography of coins’ findings, make testing of some specimens. Assays of all examined specimens (including that were earlier considered to be made from base metals), in spite of prevalent opinion,show the presence of silver (from 185 to 960 ‰).M.P. Sotnikova believed that all of the stamps of the Vladimir IV type srebreniks were engraved by one carver (except for the pair of K 174 having the features of “rough and unskillful work”), but nowadays thisstatement does not look so categorical. At the time of the publication of this work, 56 intact or nearly non-damaged srebreniks have been taken into account; data about the mass of the other 11pieces are absent. The average weight standard of the remaining 44 coins is 2.604 ± 0.011 grams. Concerning the time of discovery of describing group of coins it is possible to report that in the 19thcentury srebreniks of IV type of Vladimir Svyatoslavich were found 23 pieces (from them 21 coins come from Nizhynhoard), in the 20th 7specimens and at the beginning of the 21st century 91 coins. Data about the chronology of findings with more granularity were tabulated at the end of the paper.Since the middle of 2000 strong growth of the quantity of finding coins was observed, which topped in2013 (15 coins), whereupon situation became stabilized and recently about ten of srebreniks of the IV typewere found annually. Hence it might be supposed that utter exhaustion of findings will take considerable lapse of time and therefore only recording and systematization of srebreniks should be done now and questions about a probable revision of their classification should be left for following generation of numismatists.Since the publishing of Corpus topography of storage of the IV type of srebreniks of Vladimir also changed. If before 1995 AD 21 coins (from 25 known, i.e. 84%; the rest 4 coins or 16% were undiscovered,including specimen К 175-4, from which only galvanic copy has survived) were stored in state museums, thento the middle of 2018 only 24 coins numbers in state collections (from 121 known ones, i.e. 19,83% or about1/5 of the whole quantity, 4 srebreniks are as before undiscovered (≈ 3,3%), and in private collections are known no less than 93 coins (76,86%, i.e. ¾of the whole body of the IV type srebreniks). Accordingly, the centre of the study of early Rus coins gradually moved from museums to the surroundings of private collecting.From examined 121 early Rus coins only 13 specimens have traces of non-economic usage and on 2 of them, they are possible.The author compiled the table with the given expanded topography of the finds of the type IV srebreniks,also the metrological data of majority known coins were checked up which significantly widened our understanding of Vladimir Svyatoslavich’s monetary emissions.