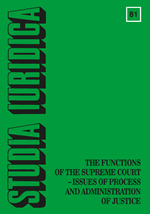 Summary/Abstract: The text presents different attributes of the Supreme Court in common law and civil law systems. The author claims that the question of design and function of a supreme court, while important, is no more significant than the issue of its institutional status and evolution, i.e. something one could refer to as “legal culture”. Neither the “common law camp”, nor the “civil law camp” turns out to be monolithic in this regard. The distinctive history of the US Supreme Court is presented through the perspective of its statutory and procedural supremacy, as well as its power of constitutional adjudication. The author indicates that the supremacy of the US Supreme Court depends on many factors. Arguably, the most important attribute of the US Supreme Court’s supremacy is linked with the latitude offered to judges in common law system to “make law”, which stands in contrast to a limited judicial function in many civil law countries. The author argues that being a court in a common law system carries with it much broader authority. A supreme court in such a system is, as a result, much more supreme. The author concludes his comparative remarks by saying that it is not possible to proclaim the superiority of one specific system because there are too many variables that come into play with regard to respective nations.