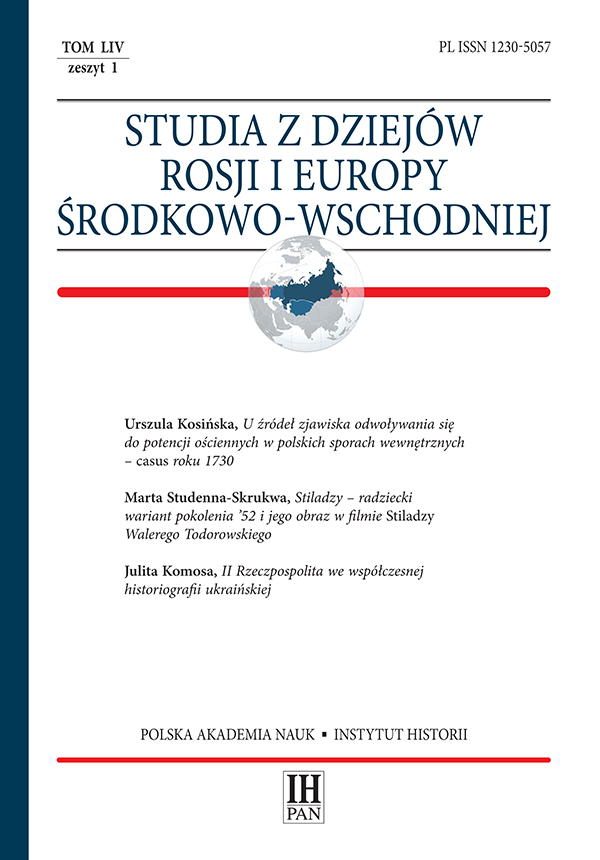 Summary/Abstract: The development of the system of reprisals against the Polish landed gentry in the Taken Lands after the fall of the January Uprising (1864) resulted in the need to legally define the subject of system restrictions by the Russian state. It was therefore necessary to determine who was a “person of Polish descent”, and devise a method of separating such a person from other inhabitants of a multinational and multi-religious society living in the former Commonwealth lands taken by Russia. The purpose was to determine who should pay the contribution imposed on the Polish population for participating in the January Uprising (1863–64) and who should be subject to restrictions in the land sales in the Western guberniyas. This was done not only by special committees (Western Committee), and special commissions (e.g. for the Settlement of the Russian Element in the Western Country of 1865), but also state ministries (mainly the Ministry of the Interior), successive state cabinets (especially under Tsar Alexander III), and governor-generals from Vilno and Kiev as well as more zealous Russifiers in the persons of governors from nine Lithuanian-Belarusian-Ukrainian guberniyas. This task turned out to be too difficult for members of the Russian bureaucratic machine; in practice, the ethnic differentiator (sometimes based on the everyday language) was combined with the religious one (Catholic). So the “person of Polish descent” was usually a Pole who used Polish at home and professed Catholic faith. Problems appeared when the landowner was of Polish nationality, he spoke Polish, but he was not Catholic, e.g. Orthodox, or he was Catholic, he spoke Polish, but he considered himself a German, or worse, a Russian! In the face of such cases, which were not uncommon, everything (i.e. paying contributions and the right to trade in land) depended on the decision of an individual governor.