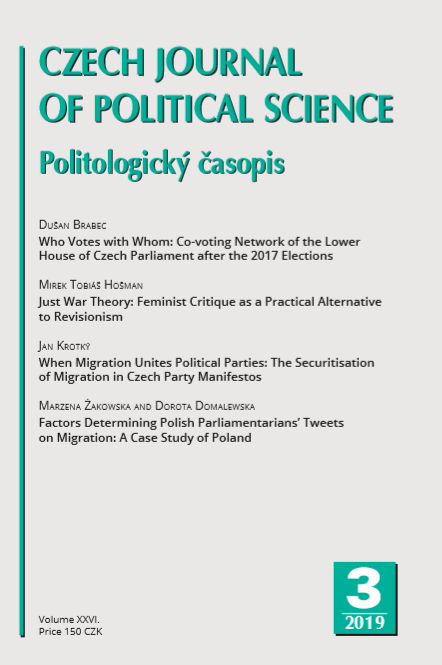 Summary/Abstract: This article aims to identify and analyse the structure of co-voting ties among the members of the Chamber of Deputies of the Parliament of the Czech Republic. The structure of co-voting ties is approached as a network of members of parliament that represents the rate of co-voting between each pair of deputies that were elected to the lower house of the Czech parliament in 2017. Similarity of the voting of deputies is treated as a proxy indicator of a potential relationship, either co-operation or rivalry between the MPs. This study focuses exclusively on the level of political party groups, their internal cohesion and intra-party co-operation, based on the co-voting ties between all members of the parliament. The main findings of this research are that the dynamics of the internal party cohesion of each parliamentary party and their voting co-operation are heavily influenced by the time the government is formed. As the internal cohesion of political party groups present in the Czech parliament and even the co-operation between them changed drastically after the government of Andrej Babiš got the vote of confidence. This research connects the findings with the previous works on the internal cohesion of Czech political parties.