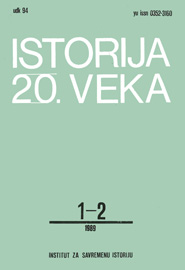 Summary/Abstract: The agrarian and peasant issue includes social, economic, political, socio-psychological and cultural subject matter, whose meaning changes through historic evolution and differs from one particular country to another, but nevertheless primarily depends on the character of the political and economic structure of a given global society. The period discussed in this study is very short from a historical viewpoint, but considering the dynamics of events which took place in the world and in Yugoslavia in the first half of the 20th century, this is a period filled with numerous, important events and agrarian changes vital to the agrarian and peasant issue. It would be difficult to understand the changes which took place in agrarian affairs after World War II, without being acquainted with the pre-and post-War periods of this subject matter. The primary activity in the economy of the Kingdom of Yugoslavia was farming. The two crucial problems of this branch of economy were peasants’ debts and the never satisfied „hunger” of the peasants for land. Hence, there was not a single political party whose program and political activity did not deal with the peasant and agrarian issues. The Yugoslav Communist Party could not avoid this problem either; during World War II it already found itself in a position to influence changes in agrarian affairs. The sporadic distribution of land to the peasants (based on the principle according to which land should be given to those who cultivate it) and collectivistic farm production on liberated and semi-liberated territories, were the first heralds of changes to come. After the War, the Party, in its creation of agrarian politics, gave economic moments secondary importance in respect to political ones. The two most important political and economic measures taken by the new State in 1945, were the agrarian reform and colonization, and, with them, the farmers' and peasants' cooperatives and the practice of buying up the entire agrarian output.