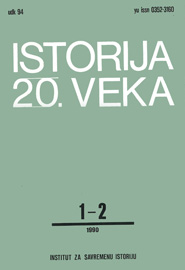 Summary/Abstract: The revie „Stožer” (Axle) as published in Belgrade at the time of political absolutism in Yugoslavia. As the left publication, it supported the putting into effect of the ideas of Communist movement and in a period it as under the direct influence of the Communist Party of Yugoslavia. It found its place in the movement of social literature, hich fought for the development of ne relations in art, first of all in literature. The authors of articles, published in this paper, pleaded for the domination of class component in a works of art and for the socialization of the total creativity in the culture. According to these interpretations, the art ought to be a concrete means for the struggle in the planned revolution, to help, by its expressive possibilities, the coming to po er of the proletariat, the destruction of the bourgeois society. In this way, the artist becomes a revolutionary. On the pages of „Stožer” as carried on also a violent controversy between the movement of social literature, conditionally termed the Harding of the communist movement, and the surrealist movement in Belgrade. It as polymerized about the sense of revolution and the possibilities of its realization. The surrealists supported the liberation of art from its political instrumentalization, for the completely unlimited artistic free from. They fought for the revolution, first in the sphere of human spirituality and conscience and only later could be reformed also the social basis, for, according to their conceptions, only a free and conscious man could carry out the revolution. In these endeavors, they remained lonely thin the framework of the revolutionary movement. There prevailed the concepts of the militant engagement of the artists and the revolution in the sense of realization of the dictatorship of the proletariat.