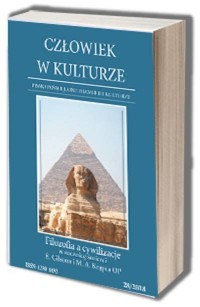 Summary/Abstract: The article concerns monistic understanding of the law conditioned by not only philosophical but civilizational factors. From a philosophical point of view this is idealism which generated incorrect usually voluntary concept of law whether in an rationalism or a irrationalism version. Regardless of whether the subordinating to with such a law was liberal and purely formal, whether it concerned an authoritarian or totalitarian state – a human being though this legalism was more and more neutralizing own critical sense and the ability to assess law in terms of morality. It seems that legal voluntarism in its version shades of meaning, being an expression of doubt in the cognitive abilities of reason and thus giving the primacy of will dominated the modern reflection on the law. This, to certain degree, was favored by the influence on the Western culture of Byzantine concept about the law dominated by the sphere of public life, appropriated by the state in which individual, if had any rights, were then only conferred rights. Indeed, in modern times were made attempt to return to the law of nature, but this did not bring the expected result due to faulty understanding of nature especially human nature. It seems that the attempt to organize the problem of the law will succeed when we see the analogous and teleological dimension of the law, in relation to human being in all its complexity.