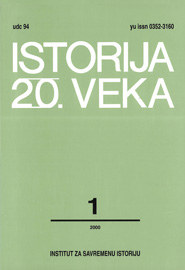 Summary/Abstract: The paper "The Modem Times", published from May to August 1941, was an organ of Milan Aćimović's puppet government and played an important part in the war propaganda of the occupying powers and of the local authorities loyal to them. The paper, strictly controlled by the Germans, sought to sooth spirits in the country, encouraged the local population to cooperate with the occupying authorities, and envisaged the building of a „new Serbia” and its incorporation into the new order to be introduced by Germany. „The Modem Times” emphasized tragic descriptions of the situation in the occupied part of Serbia and the position of the Serbian people after the April War and the breakdown of the Kingdom of Yugoslavia. The coup d'etat of 27 March 1941 was considered an important turning point, and the paper criticized those who brought it about for supposedly pushing the country into an unnecessary war, blaming them for all its consequences. In keeping with German concepts, the paper described the breakdown of the Kingdom as the work of a group of conspirators from Belgrade, led by General Simović, and the result of foreign propaganda and the international Jewish-Masonic-Bolshevik conspiracy against the German new order. Furthermore, following German directives, the paper found the roots of the country's collapse in its internal and external weaknesses and in the idea o f Yugoslav unity, which was blamed for the catastrophe suffered by the Serb people. The purpose behind this type of propaganda was to destroy even the idea of the collapsed state, thereby allowing the building of the „new Serbia” as described in the writings of „The Modem Times”.