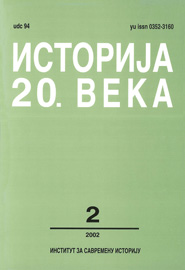 Summary/Abstract: The work, divided in 2 parts, documents the challenge of the Albanian uprising in the spring of 1945, which was a reaction to the attempt of new communist authorities to carry out the mobilization and move the Albanians, mostly part of fascistic forces until then, to the front. One part of this segment tells about the efforts of new authorities to eliminate part of latent threat of the new Albanian national movement through the recruitment to army orders. In the second part, it is given the survey of activities in which the Albanian armed guerrilla and its political movement moved until the beginning of the 1950s, when the action ceased due to the foreign policy changes in the region.