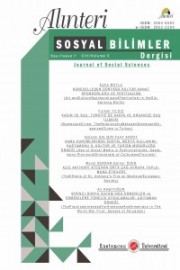 Summary/Abstract: The first world war is of great significance for not only history of the world but also Turkish history. This war as well as being the last war for the Ottoman State, caused some issues that have been still discussed today. One of these problems is Armenian Question. Armenians made use of an opportunity the World war first, revolted against the Ottoman state, helped all the way the Russian army by establishing volunteer armies. The Ottoman State had taken all necessary precautions. The Ottoman State arrested leaders of Armenia and dispatched them because they continued to rebeling. During the dispatch they had taken precautions and penalized those whom malfeasance their duties. Today Turkey is tried to be convicted on this case that is used for the different political purposes. Besides the dignitaries took all the precautions, some negations seen when the resources were being evaluated related to this era during the dispatch and housing. Accordingly, the people who had faults and disregards strictly had been punished and some possible negations were tried to be prevented. Thus Mr.Hakkı, district governor of Kahta and Mr.Edhem Kadri, district governor of Besni were dismissed due to the same reason. The aim of this study; to show what happened during the dispatch and housing throughout the World war I was not genocide as in Adıyaman sample. In this study, it is aimed to contribute to clear up the era by using archival documents, newspapers and secondary sources.