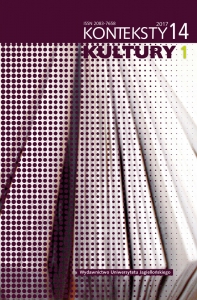 Summary/Abstract: The text illustrates the changes in representations of the Invisible in religious poetry: the crisis of language caused by the rejection of the idea of the Logos in Western culture leads to the obscuring of the symbolic transparency present in the sacred art created in the medieval and early modern period. The traditional animal imagery used in the past to illustrate the mysteries of the faith is replaced in twentieth-century poetry by opaque representations of the non-human face of God. The argument is illustrated by reference to the “speaking” and simultaneously “mute” pictures in the poetry of T.S. Eliot and the Welsh poet R.S. Thomas. The poems of Thomas, which reveal clear traces of apophatic theology, can be viewed as a response to the challenges of the post-secular age.