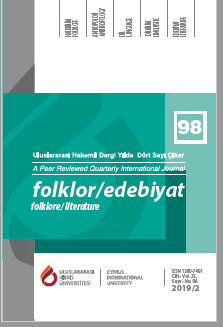 Summary/Abstract: This article aims at comparing Suat Derviş’s and Behice Boran’s criticism of novels written in the beginning of 1940s. Being a novelist herself, Suat Derviş wrote criticism of novels in her Yeni Edebiyat journal while Behice Boran wrote criticisms of novels in Yurt ve Dünya journal published by her with a group of friends. These two women, a writer and a sociologist, wrote criticisms for Halide Edip Adıvar’s Tatarcık in the same period of time and that provides a striking data which must be evaluated within the context of women, women literature and feminist literary criticism. In the article, similarities and differences between Suat Derviş’s and Behice Boran’s criticisms of novels are analyzed d by taking Halide Edip’s Tatarcık into the focus. In their novel reviews guided by a social realist point of view, Suat Derviş and Behice Boran looked at whether the novels’ characters were typical of their social environments and searched for the novels’ social usefulness.