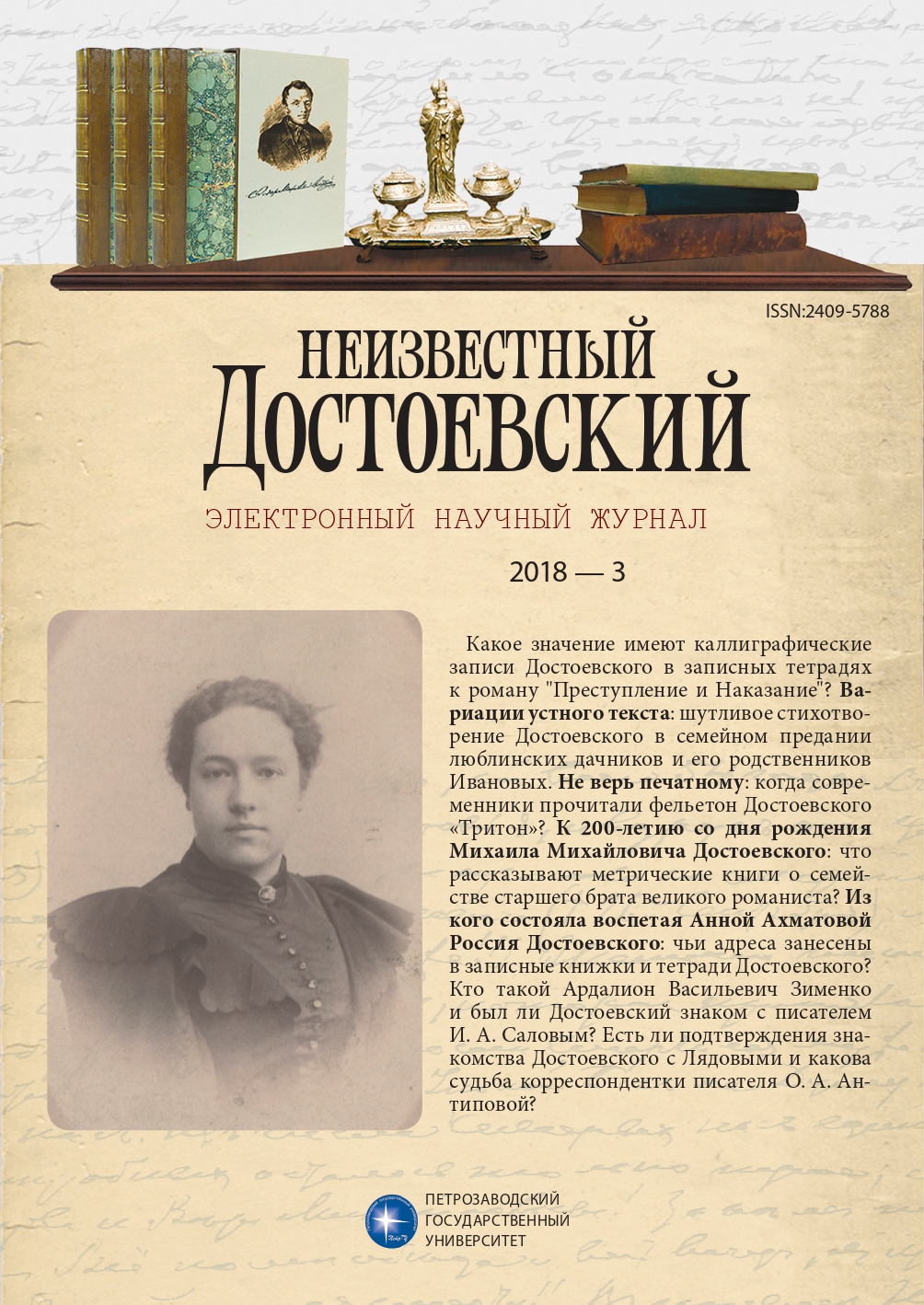 Summary/Abstract: The article continues a series of publications devoted to the genealogy of the «Petersburg» Dostoevsky, using the family of the writer’s elder brother, Mikhail Mikhailovich Dostoevsky as an example. The research scope was the parish registers of some Orthodox churches (the Church of Entry of Our Lord into Jerusalem in Znamenskaya square, the Church of Ascension in the Admiralty settlements, the Church of Assumption of the Blessed Virgin Mary in Sennaya square in St. Petersburg, the Church of the Trasfi guration, koltovskaya, Revel Cathedral of the Transfi guration), kept in the Fund of the Petrograd spiritual Consistory of St. Petersburg Central State Historical Archive. Seventeenth records of birth, marriages and funerals have been studied and published based on the originals, including the places of archival storage. There has been published a record from the “Consistorial” copy of a parish register, discovered by the St. Petersburg genealogists, about marriage between Mikhail Dostoevsky and E. F. Ditmar. For the first time the records about birth and death of Mikhail Dostoevsky’s children — Nadezhda, Vladimir, Olga, Caterina, Nikoli, Varvara — have been discovered and introduced into scientific circulation; as well as those about marriages between Maria Mikhailovna Dostoevskaya and Mikhail Ivanovich Vladislavlev, and between Mikhail Mikhailovich Dostoevsky-middle and Maria Sergeevna Antonova. On the basis of the obtained facts, which allow considering the given archive as a valuable source of documentary information on the genealogy of Dostoevsky and his family, some biographical data provided by previous researchers for the first time have been identified, or clarified, corrected and supplemented. The obtained information can be used afterwards while republishing biographical reference books concerning F. M. Dostoevsky, or while preparing a new «Chronicle of life and works...», in commentary and research work. The conducted research once again confirms the idea of the necessity of a systematic and comprehensive study of the funds of this Russian archive and others, which have not yet drawn much attention of the researchers of Dostoevsky life and work.