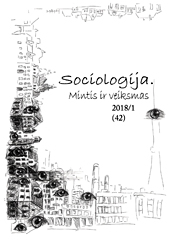 Summary/Abstract: This article explores issues related to how social roles, when imposed, become oppressive to on an individual, and how consciously chosen roles become “more true” than the reality itself and advance the investigation of human nature. The text consists of three parts. In the first part, we discuss dramaturgical theory as well as the psychosocial and artistic experiments about the social power of enacted social roles. The second part is an analysis of a trilogy directed by Lithuanian theatre director Oskaras Koršunovas – Hamlet, The Lower Depths and The Seagull. It is followed by an examination of the trilogy of Danish cinema director Lars von Trier – Antichrist, Melancholia and Nymphomaniac. Both trilogies embrace certain common dichotomies: truth vs. lie; individual responsibility vs. collective conformism; freedom vs. oppression; life vs. death; openness vs. hypocrisy; reality vs. fiction; deep play vs. superficial theatricality. The analyzed works of art, combined with the psychosocial experiments, reveal that realistic play (experimentation) can help to grasp shocking data about human behavior that would be extremely difficult to obtain without dramaturgical acting.