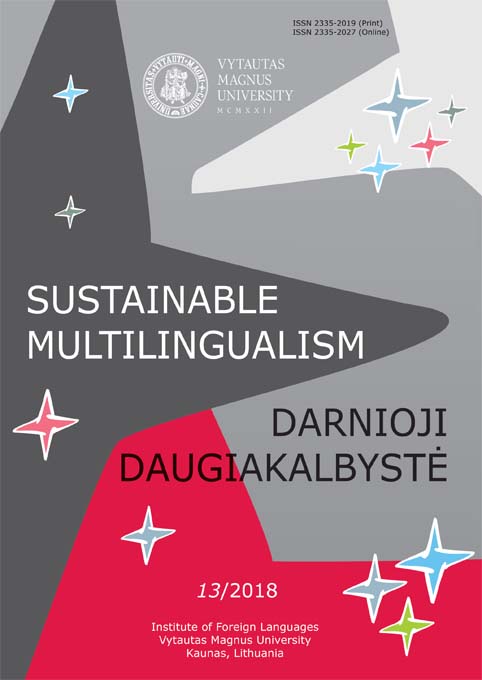 Summary/Abstract: The paper aims to analyze the attitudes to German language in the Lithuanian public discourse. Texts written on this topic and chosen for the analysis appeared in two news portals – the national news portal delfi.lt and the regional news portal kaunodiena.lt. The database covers the period from 1 January 2011 to 1 March 2017; it consists of 82 articles from both news portals. For studying the image of German, the present study applies the framework of Critical Discourse Analysis taking into account different argumentation strategies for learning or not learning German as a foreign language as well as main topical priorities. The general attitudes towards countries can serve as an important foundation for motivation to language learning, so the analysis starts with the discussion of the specifics attributed to Germany and German-speaking countries (effectiveness governing the world, sympathy, economic success, and reliability). The analysis of the selected texts confirms that the image of Germany in Lithuania is quite positive: Germany, especially on delfi.lt, is presented as a target country for qualified Lithuanian experts, as an economically stable country having a large degree of political and cultural influence in the world. Regarding the status of German, the analyzed texts reveal a more ambiguous picture: on the one hand, it is stated that German is not popular in Lithuania, on the other hand it is emphasized that the popularity of the German language is increasing. The argumentation scheme for learning German consists of several argumentation lines: German is represented as a commodity in such domains as a professional career in Germany, in dealing with bilateral business relations, and to some extent in building a professional career in one’s home country and upholding cultural relations.