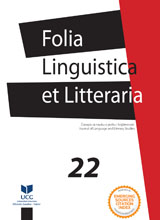 Summary/Abstract: Interart studies must constantly consider the relations and interaction of at least two media, that is, at least two semiotic systems. The position of reading those relations, as the position of research, implies continual awareness and a dangerous search for balance in the analysis of that interaction. Hence the path of the scholar could be compared to tightrope walking. At times the scholar must focus more on the analysis of one of the arts, for instance, of the literary text (as in the ekphrasis), but the relevant study must not at any given moment ignore the other art. The study of ekphrasis would be impossible if one neglects the iconographic sources of the works of literature. The study of mixed discourses is also a sort of a movement in the mutual space created by the image and the text. The scholar must never treat only verbal or visual aspects, whereby disregarding their interaction. In the case of syncretic art forms, we find the most evident the ontological position of in-between: the cultural product is neither a merely verbal nor a merely visual entity.