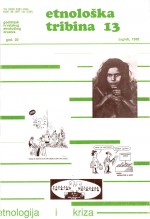 Summary/Abstract: In this essay the concept of »new wave« is related to the concept of »crisis«, on the basis of accordance of the main topics that have emerged out of these two different kinds of cultural discourse. The very term »new wave« indicates the period of the beginning of eighties characterized by the specific cultural expressions bounded with the phenomenon of the youth subculture in Yugoslavia. Although initiated by impulses from other cultures (first of all by the phenomenon of anglo-american punk), the »new wave« expression has elaborated the considerable segment of local reality. For example, the concept of »New primitivism« on one hand, and the »Neue Slowenische Kunst« on the other, have developed their symbolic activities playing with a stereotype of the two main cultural identities that »cross« the Yugoslav space: on is »Balkan«, »oriental«, the other is »European«, »western«. Modified in numerous ways, but loosing its stylistic, ironical quality that characterized its sub-cultural elaboration, this stereotype has become the leit motiv of the later explanation, even official, of the political crisis in Yugoslavia. In a similar way, the »new wave« activity, partially leaned on the western formula in creation of music, art, images and life styles, has anticipated the destruction of the myth of originality and uniqueness of our culture. What was then considered to be an »epigone«, a »dishonest imitation of the West«, hardly a decade later has merged into the common desire for »entering Europe«, which has characterized the discourse of crisis.