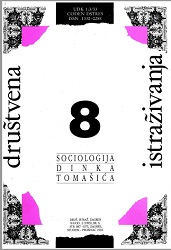 Summary/Abstract: The author considers the contemporaneity Of Dinko Tornašić's sociology in view of his concept of dual cultural models: the tribal-stockbreeding (the Dinaric) on the one hand, and the lowlands-cooperative on the other. He thus finds interesting two questions: 1) can the tribal model be exclusively related to the Serbian ethnos and the cooperative to the Croatianone; 2) is there not a dual cultural sytsem in Croatia. The answer to the second question indicates that the tribal system was powerful indeed in Croatia, from 1941 to 1945 (through the Ustasha and Partisan movements) and also in the period after 1945, in which it earmarked all important relations in former Yugoslavia. The domination of the tribal model was not impaired even with the establishment of "self-management" which, in a masked form, brought back the cooperative model onto the scene. In the homeland war a strong revitalization of the tribal model has been under way because Croatia, aggressively attacked by a country based on the tribal model, was forced to juxtapose the same model and value system to the aggressor.