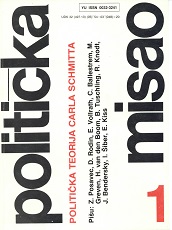 Summary/Abstract: There are three sources of antibourgeois attitude in the political theory of Carl Schmitt: antiscientism, antiliberalism and antitecnicism. Schmitt, determines the political in the existential and not in the class, confessional or the ethnic. Thus he develops his idea of the political constituted in the relation friend-foe and the notion of the sovereign as the one who makes the decision on the state of emergency. It is just the notion of difference, which will grow into discrimination in the political process, that distinguishes the political from the economic or religious. Absolutizing the difference finds its most extreme form in radical monism and the destruction of all, even the political, generality. From these premises Schmitt fails to draw (necessary) radical methodological conclusions.

Preobrazba demokratske zakonodavane države u ustavnu državu THE TRANSFORMATION OF THE LEGISLATIVE DEMOCRATIC STATE INTO THE CONSTITUTIONAL STATE 1997 Ljudska prava u Antigoninom škripcu HUMAN RIGHTS IN ANTIGONA'S SCRAPE 1997 Aspekti fenomenološkog i konstruktivističkog objašnjenja fašizma ASPECTS OF PHENOMENOLOGICAL AND CONSTRUCTIVIST EXPLANATION OF FASCISM 1998 Europa: ljuska bez jezgre. Prilog raspravi o kulturnim pretpostavkama Europske unije Europe: A Corless Integument. A Contribution to the Debate About the Cultural Preconditions of the EU 2001 Ustav bez države i naroda (2) A Constitution Without the State and the People (2) 2005
2020 © CEEOL. ALL Rights Reserved. Privacy Policy | Terms & Conditions of use
ICB - InterConsult Bulgaria ver.1.5.0917