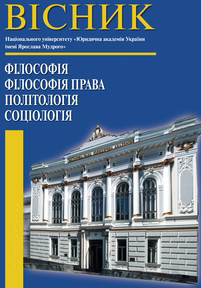 Summary/Abstract: To a certain time the processes of human identity formation were not the subject of the general science of human, the change and choice of identity happened spontaneously, economic moments as prevailing in public life were hidden «behind» consciousness. With the assertion of capitalism the construction of a purely economically dismembered society, life manifests itself in the ideological struggle for consciousness, i.e. in the struggle for identity, for concealing or exposing public antagonisms. Identity becomes the subject of theoretical discourse. The actual problematic place on this path is the necessary connection between the theory and practice of fabricating historically new identities. The purpose of this article is a theoretical understanding of the human identity as a social construct and concept in the act of metaphorical vision.Currently the identity is explored as an object of social designing in the media space of a «visible» society for the sake of the trend «all for sale». Visualization, simulation, identification are the human acts, the knowledge of which allows us to comprehend the technological process of human identity. Modern theoretical knowledge of the problems of identity formation points to the mechanism of this phenomenon. Thus, it becomes clear that the metaphorization of the human identity discourse is a law of social categorization. It is important that the metaphor is the identity (individuality, integrity) affirmation through which a complex of ideological (illusory, imaginary) qualities becomes an individual, i.e. proclaims itself a reality (truth, verity). In the metaphorization of the identity discourse a special place is occupied by visual practices: magic ritual, fashion, style, make-up, advertising, cinema, photography, poster, circus, carnival, press, etc. Human, social activities are impossible without rituals. By ritual in this case we mean practices, strengthening common identity and solidarity of community members, collective actions aimed at establishing their own symbolic space and temporality. Libreto of the ritual is a mythology. Ritual (visual) and myth (verbal) are ideological basis of social subject. Ritual and myth are symbolic, metaphorical, demonstrative (visual), etc. In addition to anthropological significance, the concept «ritual» has a common biological one – a stereotypical form of animals’ behavior under various standard communications. Animals usually strengthen their communication by repeatedly rhythmic repetition of its bodily elements (for example, for humans it is a demonstration of complex facial expressions, gestures, etc.). Violation of rituals promotes the formation of new species of animals in nature. «New species» of human are historical forms of culture of imagination and communication.The visual metaphor of human identity will be understood, firstly (from the side of the identity reification), as a social construct, i.e. the everyday vision of identity, the type of«looking» at it, which is embodied in an imaginary desirable image of self, in its own subjectness as «I» for «others» and subjectivity as «I» for «myself» (e.g.: «rose with thorns», «clerical rat», «office plankton», «money-bag», «white crow», «impregnablerock», «brownie», «frog», «wop», «vatnik», «vyshyvatnik», «zhdun», countries of «South» and «North»), secondly (from the side of the identity reflection), as a socio-philosophical technological concept, which is the foundation of theoretical discourse of the identity, this allows us to comprehend and optimize the distinction between social spaces and the totalization of their elements from the side of human visual activity (for example:«regionality», «generationality», «nationality», «genderness», «marginality»,«humaneness»).