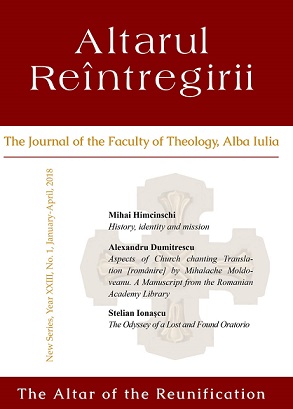 Summary/Abstract: Following a tough dispute arisen between the composer Paul Constantinescu and the Byzantinist Pbr. I.D. Petrescu, long-time colleagues in the artistic field - a dispute intensively publicized in the musical milieux - the composer made a firm announcement according to which he had just destroyed an impressive score, Passion and Resurrection (Byzantine Easter Oratorio), outgrowth of a collaboration between the two of them. Given the fact that this polemic was related to the authorship of the Oratorio, one can only imagine how deep must have been the tragedy born by Paul Constantinescu, so that he made the radical decision to ‘burn’ a work to which he had dedicated his vigour and artistical virtuosity for more than a decade! Paul Constantinescu rewrote the Oratorio, eliminating from the new version any contribution of Father Petrescu. Nevertheless, and despite the fact that all the influent niche media unanimously disseminated this piece of information and even the composer’s closest friends strongly confirmed the destruction of the first version of the oratorio, 70 years after the unfortunate conflict, the score was discovered safe and sound in the Library of UCMR (Union of the Composers and Musicologists in Romania* 1), proving to have miraculously survived, just like baby Moses in the basket, sent a drift in the bulrushes of the Nile. It is indeed the original, the one and only general score in the form of a manuscript, on which was based the concert held in 1946, with George Enescu and Constantin Silvestri as conductors. The following article retraces the itinerary of the score back from the moment of its disappearance, putting forward all the clues which lead to its rediscovery.