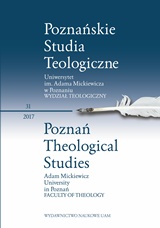 Summary/Abstract: Both the newly published writings of Edmund Husserl as well as the still unpublished manuscripts force us to reinterpret his thoughts, as in their light we find numerous anthropological and – what is more - mystical implications in the reflection of the philosopher. Phenomenology can, in fact, be read as a process of autoconstitution of the entity in its adequate being, i.e. its laborious process of self-discovery and “being born” in the light of its own inner truth. This truth, meanwhile, is the fact that our “real” and “authentic self”, that we find in ourselves with the help of phenomenology, is nothing but a trace of God in man. Thus Husserl reads the main tool of his method, i.e. the phenomenological reduction, as a kind of 1/ the subject’s meditation on itself; 2/ the process of its slow return to itself; 3/ the process of, on the one hand, deconstruction of its “popular consciousness”, and, on the other hand, of the spiritual deconstruction of its false and inadequate way of being, in which the subject is stuck each day. The end to the reduction understood this way will be the “transcendental death” of man and subsequent spiritual “birth” to a new life. Interestingly, the above thoughts of Husserl bring him close to the tradition of Christian mysticism and, among it, to the reflection of Nicholas of Cusa. Therefore, the aim of this article will be the study of the basic categories of the phenomenologist’s thinking in the light of Cusanus’ doctrine of “enlightened ignorance”, his concept of “negative thinking”, mystical cognition and the inner transformation of man, so that it becomes possible to demonstrate some convergence regarding assumptions which guided their reflection, its direction and finally the fundamental conclusions.