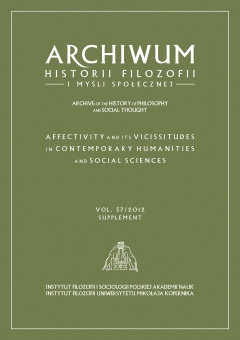 Summary/Abstract: “Illness as metaphor” has become a widespread expression used in writings of history of ideas, since its first appearance in the essay of Susan Sontag. The present paper offers an analysis of its use in the 19th-century Hungarian culture. At first, it is distinguished the use of diseases and bodily conditions as a cause of the author’s ideas in interpretations, from the illness-metaphors of S. Sontag, and from the body-metaphors of the early modernity. In the second part it is detailed the bodily self-reflection of the 19th-century Hungarian authors in context of the ideas incarnated in their works, and the images of their contemporaries, described by them, using bodily symptoms as causes of the ideas of their reviewed books. In the focus of the analysis are the memoirs of Gusztáv Szontagh, a distinguished critic of the second quarter of 19th century, edited by the author of this article for publication. Szontagh has used the patterns of the bodily determination of the ideas describing a large scale of authors, creating a New World made of words, only, in literature, philosophy, and politics. This complex system of ideas has lost its connections with the theory, and had become an element of the political rhetoric in the second half of the 19th century, and in the first half of the 20th century. An outlook for this afterlife is the topic of the epilogue of the present article.