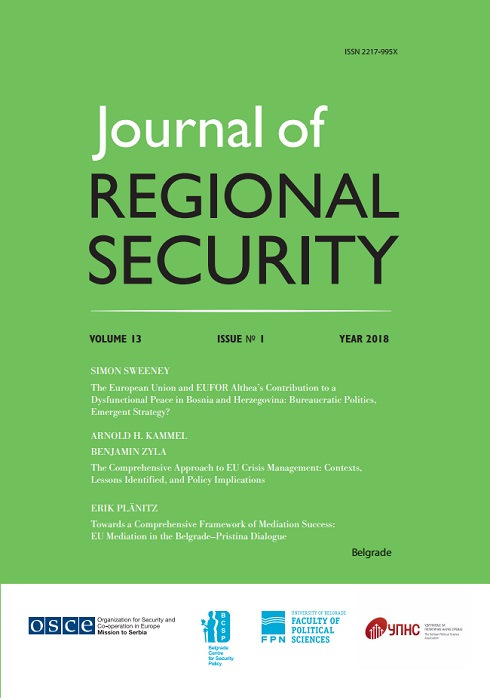 Summary/Abstract: This article assesses the EU Common Security and Defence Policy (CSDP) in the Western Balkans, with a focus on EUFOR Althea in Bosnia and Herzegovina (BiH). Althea is a military operation that conducts mainly civilian functions as well as the training of the Bah Armed Forces; its ‘civilianisation’ is symptomatic of CSDP’s orientation as a mainly civilian crisis management instrument. Althea works within the framework of the Union’s ‘comprehensive approach’ to regional development and the accession process of the Western Balkans to the EU. I argue that the mission displays the bureaucratic modus operandi of CSDP and not a Grand Strategy approach. Nevertheless, CSDP’s incremental, lowest-common-denominator, low cost, low risk bureaucratic politics have enabled a form of emergent strategy that complements the Union’s multi-instrument and comprehensive approach to development throughout the Western Balkans. I further suggest that the EU Global Strategy (EUGS) and the newly activated Permanent Structured Cooperation (PESCO) provides opportunities for EU member states to build on low key emergent strategy to ensure that CSDP develops the substance and actorness needed to address current threats.