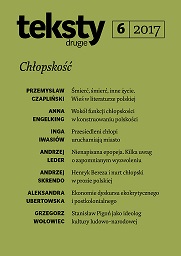 Summary/Abstract: Engelking examines the representations of the Poleshuks (the people of Polesia) in mainstream Polish culture. Based on selected examples of popular writing from the interwar period, Engelkind portrays Russian peasants – the ancestors of today’s Ukrainians and Belorussians – as an emblematic figure of Polish discourses of the Borderlands. The stereotypical notion of the Poleshuk is based on concepts drawn from race theory, nationalist and colonial discourses as well as modernizing ambitions, and it is an internalized and at the same time excluded Other. Like the Jew, the Poleshuk functions as a constitutive foreign ethno-nationalist model of Polishness. The Poleshuk is excluded from Polishness in two ways: as a peasant (a savage with no culture) and as a Russian (Orthodox, Bolshevik). It is the narcissistic self-image of the Pole as the higher ranking ‘lord’ (pan) that requires this image of an untamed and untameable ‘Poleshuk’ as its obverse constructed on national and class-based difference.