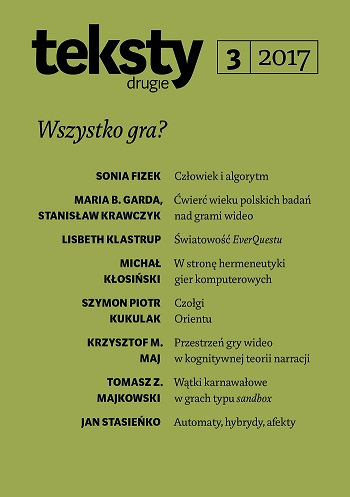 Człowiek i algorytm. Ku automatyzacji rozgrywki w grach crowdsourcingowych
Towards the Automation of Play: Humans and Algorithms in Crowdsourcing Games

Summary/Abstract: This paper provides an introduction to the emerging phenomenon of the automation of play. It discusses the roles of human and algorithmic players focusing on so-called crowdsourcing or citizen science games, in which thousands of human players perform various tasks to advance scientific research, and by doing so help train the algorithms that may automate the process in the near future. Although much emphasis is laid on one specific genre, Fizek’s aim is to provide directions for further discussion and conceptualize the automation of play within the wider theme of the human-machine relationship and the automation of the everyday.