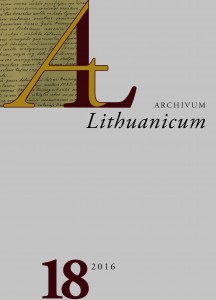 Summary/Abstract: In contrast to his historical and fictional writings, works on agriculture by the well known author Teodor Mateusz Ostyk-Narbutt (1784–1864) of Deeds of the Lithuanian Nation (Dzieje narodu Litewskiego, Wilno, 1835, 1837–1841; further – DNL) have not received much scholarly attention. Of course, ethnologists could not miss publications such as Narbutt’s book Cultivation of Flax, Cannabis, and Other Fibrous Plants [...] (Uprawa lnu, konopi i innych roślin włóknodaynych [...], Wilno, 1833), but they were merely interested in the practices described by Narbutt and not the phenomenon of his creative activity. “Paper is a soil, and the quill is a plough”—Władysław Syrokomla (Ludwik Kondratowicz, 1823–1862) found these words inscribed on a manuscript that remained after the death of an alumnus of Imperial Vilnius (Pol. Wilno, Rus. Вильна) University, Jan Bogusław Rychter (1787–1854), who was a physiocrat, a professional steward of estates, a writer, a journalist, a member of the “Rascals” (“Szubrawcy”) organization, and a Freemason. Syrokomla was delighted that this estate owner and writer worked for the sake of his land equally well with a quill as with a plough. The same may be said about Narbutt, the owner of Šiauriai (Pol. Szawry, Rus. Шавры) estate (860 desiatin) in Lyda County in Grodno Province (after 1843 part of Vilnius Province). Besides the study of flax and cannabis cultivation already mentioned (the first manifestation of this book was Narbutt winning a Vilnius University competition on new methods of cultivating flax and cannabis), Narbutt published at least ten texts on agriculture in Vilnius periodicals of 1828–1830. In all of these works we can also sense Narbutt as a historian, an attentive reader of old documents.