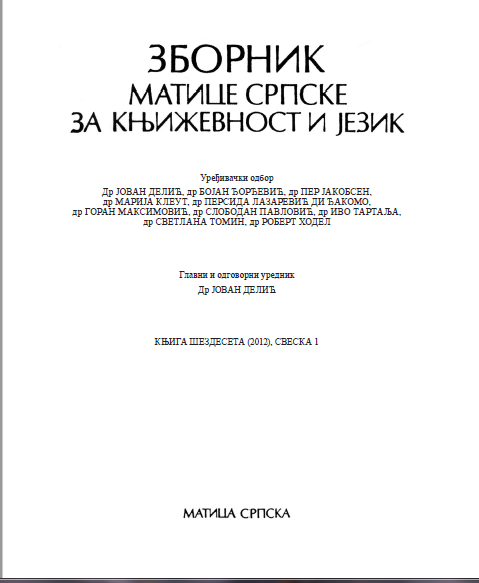 Summary/Abstract: The topic of our attention is Vojislav Đurić’s work „Najnovija Andrićeva poezija“ (Andrić’s Most Recent Poetry) (1962) about Ivo Andrić’s collection of short stories Lica (Faces) (1960), that is about its dominant lyrical-painting technique. This Collection was negatively reviewed by the literary criticists in the press at the time, so Andrić’s status in the Serbian criticism from 1960 to October 1961 was the least favourable in his entire creative lifetime. We document that in this paper with the analysis of Petar Džadžić’s critical text „Ivo Andrić: Lica“ (Ivo Andrić: Faces) published in Politika (1960). Putting emphasis on Andrić’s technique and his principles about the formation of his world, Vojislav Đurić joined modern methodological orientations in the literary science of that time, and by determining Andrić’s technique in Lica (Faces) as a lyrical-painting one, he noticed innovations which this book of short stories brought in its opening towards the essay, and specially towards lyric poetry.