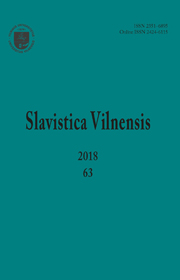 Summary/Abstract: Spatial prepositions refer to markers of spatial relations, functional and semantic features of which in different languages are actively explored in recent decades. The common origin of spatial prepositions in related languages and their formal similarity (partial or complete) provoke a false identification and transfer of spatial values from one language to another. Comparison of spatial prepositions in the Slovenian and Russian languages, which is the subject of this article, allows us to identify the specifics of the conceptualization of space in languages. In the first part of the study, Slovenian and Russian non-derivative spatial prepositions are analysed on the following parameters: static and directive situations; in the latter the starting and finishing positions are singled out. The second part of the study examines the differences between the two Slavic languages in the development of some non-spatial meanings. The analysis of spatial structures shows that although there are similarities between the prepositions in grammatical and semantic senses, the composition of prepositions, their mutual relations and systemic connections, the ability to form microgroups in two languages differ. In the Slovenian language, the sign of static / dynamism is relevant for the prepositions v, na, nad, pod, pred, za, med, ob, in Russian this feature is relevant for a smaller number of prepositions: в, на, под, за. Differences in the conceptualization of space are peculiarly reflected in the formation of temporal and functional meanings of spatial prepositions, which reflect the selectivity of languages with respect to those particular spatial meanings of prepositions that underlie non-spatial ones.